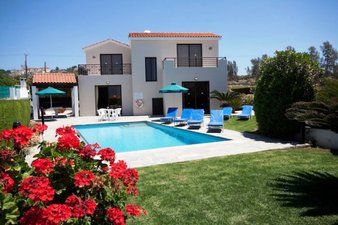 Aphrodite was the goddess of love. According to mythology she was born from the foam of the sea off the shore of Paphos. She had a prestigious sanctuary in Pilaipafos (present Kouklia) where she was worshipped for nearly 2000 years. She was the Great Goddess of Cyprus.

She was the patron of sea-travellers. Atheneus, a Greek author, narrated that a rich merchant from Naucratis in Egypt, called Erostrate, had come as a pilgrim to the sanctuary of Aphrodite in Palaipafos. There he bought a small figurine of goddess.

On his trip back his ship weathered a storm. All the passengers in great fear begged the statue of Aphrodite to save them. Aphrodite the 3rd cent. B.C. wrote: Gazing at the sanctuary of Marine kypris..

The master bedroom is situated on the ground floor facing the sea with a large bathroom. Elegant bars separate the kitchen and hall from the lounge areas

The lounge is a comfortably furnished and equipped with a satellite TV, CD player radio and DVD. The fitted kitchen has kettle, toaster, dishwasher, washing machine, fridge, electric oven and an electric plated stove, microwave, full set of crockery. The two bedrooms on the first floor are both en suite with large balcony to enjoy the view, table and chairs.

The barbeque (gazebo) areas have a table and chairs. The pool is 9 m x 4,5 m and surrounded by sun beds, umbrellas, there is also an out door shower.

Book your own chef and enjoy Cyprus and Meditteranean dishes from our 40 years experienced chef.

A/C is included in all rooms .

Please enter the message you'd like to send to Einalia

1. The person who makes the booking accepts these terms and conditions on behalf of all members of the party and is responsible for all payments due by the party. By making a booking you confirm that you are at least 18 years of age and you have read these Terms and Conditions and agree to comply with them, also that you are acting with the consent of the party you are making the booking for.

3. Any damages caused whilst residing in the villas must be replaced or paid for.

5. We cannot be held responsible for building work in the vicinity of the villas. We will do our utmost to inform guests of forthcoming work.

6. If the payment is by VISA, the payment will be in Euros. There is no additional charge for payments with cards.

7. The villas must be vacated by 11:00 am on the day of departure. This enables the villas to be cleaned for the next occupancy. If there is a gap in the change over rental period, guests may be able to stay in the villa until departure time but this must be pre-arranged with the villa owner.

Properties nearby Einalia within 10 km

at approximate 0.57 km
€
We use cookies to ensure that we give you the best experience on our website.
I accept